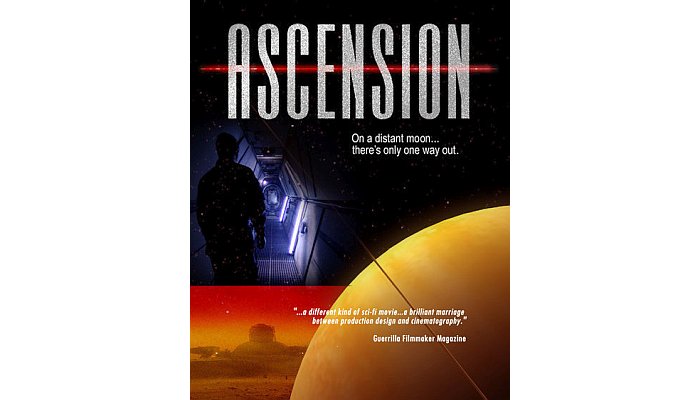 ASCENSION is an extremely slow moving, low budget, 80-minute cerebral science fiction film. It’s minimal plot and dialogue could easily fit into a 30- minute film. The filmmakers (writer/director John Krawlzik, and his wife, producer Lorrie King of Reading, PA.) are mostly interested in creating a dark, dream-like, contemplative mood in which something creepy is going on that you may not completely understand. They accomplish this. If you’re a fan of the original version of SOLARIS (Tarkovsky) and of THE MAN WHO FELL TO EARTH (Roeg), you might have a built in appreciation for the film.

The film has several impressive shots (cinematography is by John Krawlzik and Steve Wylam) and its production design (by architect Carol Clouse) is astounding, when you realize the film’s budget was not much more than $35,000 total (sets were designed and built inside a large warehouse space). Imagine what Krawzlik and company might do with even a tiny indie film budget of a million dollars, heck even $200,000.

Of course you might wonder why this particular story and project became such an obsession with its creators that they spent all of their time and extra money on it. They probably wondered the same thing several times themselves, but sometimes you just have to go with your gut and make your own dreams come true. Getting any film made is an arduous, difficult process. Making one outside of the system with a personal vision and obsession is an incredible accomplishment. Any low budget filmmaker attempting to put the elements of a film together is equivalent of a world-class athlete competing in a decathlon.

Making one that is even partially successful is as unlikely as winning the lottery, because even if you complete your film project (few do), and successfully get the movie played at various regional film festivals, you still need some level of approval from an audience to have any hope of getting the film distributed. You need the project to make at least a small profit somehow. A lot of the festival film audience will be jealous of the fact you completed a film (perhaps they never could), and a lot of the audiences will be thinking of how much better they would have made the film if given the chance (but they haven’t been given the chance and don’t risk everything and take the chance themselves). A lot of the audience will recognize films that are exercises in technique and mood, rather than films offering a strong narrative.

If you demand action, special effects, monsters, or anything resembling a roller coaster or fun house ride in your movies, ASCENSION is not for you. This is an extremely low budget art film – something Kubrick might have made with pan handled change years before 2001: A SPACE ODYSSEY. There are three characters in the entire film and a couple glimpses of a young boy running in some snow. Insert shots of futuristic computer technology look more like shots from screens of the first home computers. Special effects are odd camera angles, tinted lighting, smoke and a decent looking miniature model. Dialogue is minimal if you don’t count the voice-over narration delivered in a very compelling style by lead actor, Paul L. Nolan, who plays Hayes. The plot is minimal and what little humor there is in the film winds up as dry as the Mojave. A few digital effects are used creatively in place of fancy editing wipes. I think there was film flashing, various frame speeds employed and a few other inexpensive ‘tricks’ utilized. It helps cover the miniscule budget pretty effectively.

It is the year 2057, on the 15th moon of Saturn (whose surface is reddish like Mars), a mysterious government’s hit-man/investigator (Hayes) has been sent to the research lab that has somehow been built on this uninhabitable place. He might be from the U.S. but characters call each other “comrade,” suggesting perhaps these characters are actually Russian (maybe Russia won the cold war in this film’s fictional back story universe). It isn’t explained, very little in the film is, as we experience things along with the investigator Hayes. In the film’s opening moments, as Hayes descends into the lab, he explains how he was once given the most important assignments, but now is on this lowly mission in this godforsaken place to solve a mystery. After five years of being the lab’s project leader, a man named Barnett inexplicably walked outside into minus 196-degree conditions with no protective gear. Hayes tries to get inside the mind of Barnett so he can understand what might have happened. He goes through Barnett’s things, looks at logs and eventually at computer photos Barnett has taken. A crystal like object he finds triggers a disturbing memory on earth.

Hayes meets the two scientists who are also in the research lab. Sterner (Curt Karibalis) is the non-social, barely communicative, highly paranoid male scientist and Andrea Lippert (well played by Sally Mercer) is the depressed, lonely, possibly suicidal, 42-year-old female scientist. There appears to have been little socializing among the scientists at all. There have been few visitors and often communication is knocked out for weeks at a time by the planet’s severe storms. Is it all really happening? Is it a metaphor? Is anything going to actually happen in the movie?

Paul L. Nolan is interesting to watch, even scrutinize, as Hayes, and a film where little happens is helped quite a bit by an actor who’s got some acting chops and charisma (Nolan does). There are times his character is too quickly spooked by odd noises, considering the type of character he is playing, but Nolan keeps Hayes believable.

The film’s minimal plot, slow pace, lack of action and humor, along with its low budget makes it a chore to sit through. However, there are virtues for patient viewers and film students. The film is flawed even when viewed on its own terms, but it also displays much more than a simple basic filmmaking savvy. Several shots and the mood and tone of the film will stick with you. I also want to mention the impressive sound design and score created for the film by Len Miller of Dreamscape Music. Those who demand more than basic visceral escapism in films will find some interesting ideas, shots and remarkable low budget innovation in ASCENSION (which has won several minor film festival awards). If you want a low-budget roller-coaster ride that mimics Hollywood’s overblown summer blockbusters, you should look elsewhere.