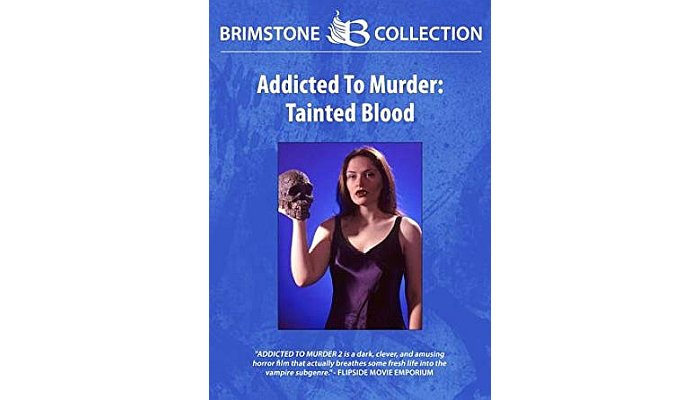 This is not so much a sequel to the most excellent Addicted To Murder, as it is… well, actually, it is not a prequel either. I guess it is more of a lets fill in all the other stuff-quel instead, as well as being a prequel.

First, you really need to see Addicted To Murder to figure out what is going on here. If you just jump in with this film, it is going to be somewhat confusing, and you will wind up lost and not enjoying the movie the way it should be enjoyed.

Much of Addicted To Murder 2 takes place before the events in Addicted to Murder. Joel has been abandoned by his first lover, the vampire Rachel. He packs up his stuff and leaves his hometown, hoping to find another true love in the world. But, Rachel has started giving her ‘gift’ to people who aren’t worthy, and Angie (Sasha Graham, who seems to grow on me. I like her more and more every time I see her) has to try and stop it and her. Tricia (Sarah K. Lippmann) is one of the new faces and vampires in this film. Tricia is just a nice, sweet girl looking for love in the big city. She finally puts an ad in the newspaper, but still can’t seem to find that one love she wants. Tricia tries to fight her blood-lusting urges at first, but she finally has to face what she has become.

One of the best things about this film was the stuff done by cult director Ted V. Mikels (The Corpse Grinders, Astro Zombies). It is nice to see homage being paid to the true masters of low budget horror cinema. Maybe one of the worst drawbacks to the movie for me was I already know what happens to so many of the characters. Joel, the erstwhile vampire killer, seems almost a secondary character in this one.

I sort of liked him. I think they need to do something more with him if they continue the franchise. I think the gore was just right. Not too much, but still enough to keep your interest up. I did like that not every killing was shown shot for shot, and drug out like some bad dream, where you are hoping that it ends, but don’t count on it. For example, the hitchhiker who climbs in Joel’s car near the beginning of the film. Nice work, Lindenmuth.

This is from the back of the video box: “New York City is one of the prime breeding grounds for the vampire, a creature that is very selective in whom it chooses to bestow the gift of eternal life. Among the candidates are the twenty-something Tricia, who desires to experience any life but her own; Jonathan, a young vampire with an attitude problem; and, of course, a few serial killer types like Joel Winter, who search for something beyond their psychopathic lives. But there’s one problem. A rogue vampire is turning people who aren’t worthy of “the Gift” and it’s up to Angie to find her sister and put an end to these creatures with the tainted blood.”

While I may be one of the exceptions to the rule, I still think I liked the original a little more. But this one is still a very good film with a lot to offer.