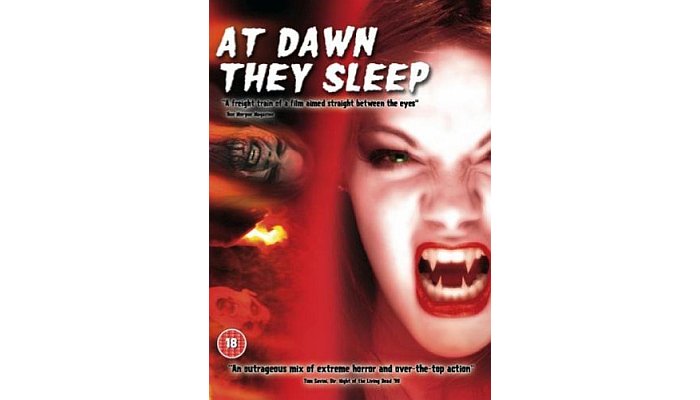 I liked this one. I thought it was well thought out, fairly well acted and had a pretty good premise going for it. The gore was good, the sex was adequate without going overboard and the film making itself was on par. The writing was pretty darn impressive. There were some pretty good lines in this movie. Spoken between two men after a car has been driven through a house:

Guy 1: “We better leave. The people who live here are gonna be ticked”.
Guy 2: “Yeah, I would say so. What do you say to an insurance agent at a time like that?”
Guy 1: “I don’t know. We left the house to go to a movie. When we got back, heck a car had grown in our living room”.

Another time, a group of guys are setting around talking about the greatest Science Fiction TV show of all time, Battlestar Galactica. Heck, this movie won me for life there. At another point, Steven (our anti hero) has a conversation with a man in a bar. For only about two minutes they used “FUCK” over 30 times. Another time, the same guys who were talking about Galactica used its name 21 times in about the same length of time. But, the thing is, it fit. It fit with the characters, where they were and what they were doing. It made sense. I could understand the way it was used here. Not so in a lot of other films. In many, it is used as a way to fill in space, because someone just didn’t know what else to use. Here, the writer proves that he can write; that he is creative, so using these words in these two places fits exactly what is going on.

Ok, on to the gore which is fairly intense. Knifes to the head, ax’s to the leg, heads bashed in, chests ripped open, hearts, and lungs torn out of their cavities and eaten. Altogether, this film must have used about 50 gallons of fake blood.

Our ‘heroes’ are Steven and Ian, two close friends, who are also murderers, drug dealers and not really nice guys at all. One night, they get involved with a couple of women, are turned into blood sucking drug dealing murderers and set out for revenge against rival drug dealers. The women are Angels and they have converted the two of them to help them in a war to kill off the human race so the Angels can take over the world. As the angels explain all of this to our erstwhile vampires, there are a few things that I don’t totally get. Nothing major, just a couple of little things. If, as the angels allude, there is no Jesus as Savior, then why would the blood of a holy man taste better then that of an ordinary human?

Also, one of the ‘holy men’ is clearly shown not to be. Shouldn’t a comment have been made about his taste? Nothing major, like I said, just a couple of little things that I wondered about. It sure did not take away my enjoyment of the film itself. Oh, another great line has Ian talking to Steven near the end of the movie. Keep in mind; this is a flesh eating, drug dealing, and blood-sucking killer talking to another one. Ian tells Steven he has become an abomination. HAHAHAHAHA! I loved that one.

Oh, problems. And this was a major one for me. My copy of the film really had the voice of the Devil all screwed up. Now, I think part of that was the way the film was supposed to be, to offer a sound somewhat inhuman. But, I personally, just an opinion mind you, think it was a bit too distorted. It was almost unintelligible in some places and I had to keep rewinding to figure out what was being said.

Oh, yeah. Lesbian Nuns. I love it! And, it gives a whole new meaning to the phrase “eating pussy”.

This was an excellent example of what a low budget movie should be. Entertaining, shocking, well written and well made so kudos to Brian Paulin for his excellent work here.