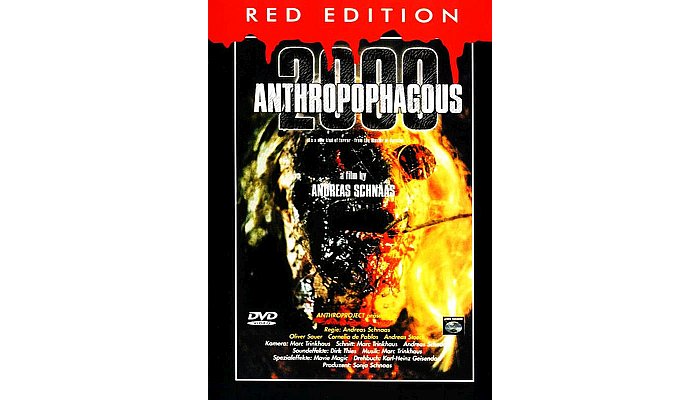 Gore-hounds rejoice! Director Andreas Schnaas is back with another wicked tale to share. That’s right, the man that showed you how to staple pubic body parts together, put lopped off heads in a jello bowl, and also had the guts (pardon the pun) to title a trilogy VIOLENT SHIT, has brought us another tale of gore, dismemberment, intestine pulling, face ripping and all other kinds of fun nasty grue! This time there are differences and improvements from his past work, bigger budget and of course, the obvious, a tribute via remake to the late European filmmaker, Joe D’Amato.

Whether fans of D’Amato will celebrate or not, is hard to tell. As a tribute, for me, it works on several levels. One, being that the remake itself does follow the original directly without deviating too much here or there to make it solely a Schnaas film. Two, unlike Andreas’ previous work, the silly humor is absent in this production, which is a blessing and a relief in many ways. And three, the desolate view of the village and desperation of some of the characters remains the same as the original not to mention the mind boggling “screw you” George Eastman scene was not changed either.

On the other hand, the fact that it is an S.O.V. (shot on video) hinders it greatly, in that it loses that great seventies and early eighties look that so many European, especially Italian, films had. There are also skeptics and a lot of very picky and decisive, but loyal fans of the golden age of European horror, who may or may not feel that Schnaas picked a familiar name and a popular title to encourage sales, etc. But, one may have to look at the fact the Joe D’Amato is as loved as he is hated in horror circles to know that this director could have picked someone far more sturdy and respected in order to get that kind of recognition! Time will only tell whether this latest outing will be a worthy contribution and salute to a long loved genre of films and fans.

PLOT:
As I stated before, the plot is pretty much the same as the original so I won’t go into it too much here. It seems that a certain family is left floating for days in a life raft after their boat capsizes during a storm. The father, out of desperation to save his wife and himself, decides to feast on their injured and dying son. During a struggle with his uncompromising wife over his dinner tastes, he stabs his wife instead. He eats them both, goes insane and washes ashore alongside a small sea village and continues cannibalizing the inhabitants! Several years later, a group of 6 people head of to this small village in search of friends who live there only to find it deserted, except for several corpses, a strange lady dressed in black and a veil, and a blind frightened girl who later joins the group as they search for answers and a way to leave the area safe and sound once they become trapped with no escape. Meanwhile, our cannibal is feasting on anyone who happens to wander by, be it campers, travelers or these new 6 people, which just happen to be on the madman’s menu!

I must, again remind, this was shot on video, and with that in mind, along with Andreas Schnaas’ reputation, not to mention German horror films in general during the last 15 years or so, combines to become one heck of a gross out film. Unlike Joe D’Amato, who had to deal with budget restraints of film, technology, censorship and a limited amount of resources for distribution, Schnaas has the upper hand to go over the top, and over it he goes with smiling glee! This helps and hinders the film as a whole at the same time. For gore fanatics and fans of other Schnaas’ films, the film has plenty of gut spillage to show and much to talk about afterwards. But, on the downside, the S.O.V. does hinder the style and as with other previous vid outings, the effects can look rather crude at times. 16mm or 35mm it is not and never will be.

Being a huge D’Amato fan myself, I was not offended by this movie and found it to be a decent tribute to the late great director. On the other side, I might want to point out, that Schnaas doesn’t have the camera eye that D’Amato had or the keen sense of finding those special ladies that really stood out in his films. They both, however, do know what it takes to make an exploitation film work on the violence and gore meter levels and SOMETIMES, depending on the frame of mind that were in at the time, that is all we need just to sit down and get grossed out and have fun at the same time!