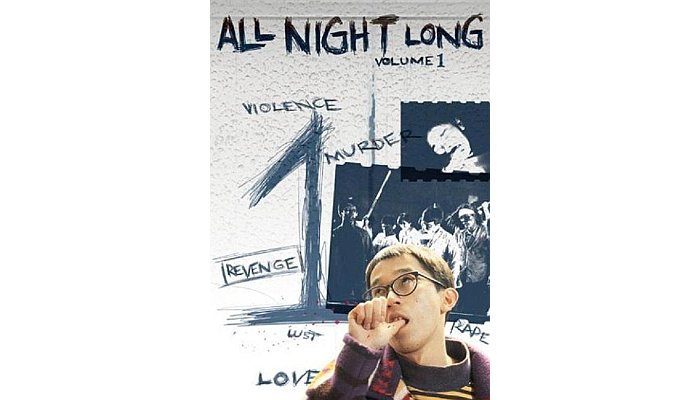 According to the liner notes, Thomas Weisser, author of THE JAPANESE CINEMA ENCYCLOPEDIA, states that the ALL NIGHT LONG trilogy of films is based what he calls “dove style violence.” This is based on certain types of birds that peck on individual birds within the species that happen to be weak, crippled or different. And while this is very true, I think there is a lot more going on in director Matsumura’s bleak look at human life and what it’s worth in Japan.

Matsumura seems to want to take this idea of the weak and contrast it within a very cold uncaring society and tackle three different emotional outlets, one per each film. Dangerous emotions that are left once more positive feelings in society have been obliterated. This is extreme stuff, folks, without the aid of bizarre slapstick humor found in a lot of Asian cinema today.

Our first film has three young high school boys who all witness a brutal murder up close. Due to this, they form a strange friendship and plan to party once a week as a way to forget what they went through and get on with life. This of course brings in the real pressures of everyday life and what’s expected of them.

Mainly, during high school, especially when trying to impress friends, that would be scoring with the ladies. Two are humiliated beyond belief creating a deep hatred within and the third finds what seems like a true courtship. Matsumura even hints at the lack of passion in this relationship as well. The two are scene arm in arm, in love, yet his new girlfriend admits on several occasions, her distance towards caring and life itself.

All comes to an abrupt end as his new girlfriend is savagely beaten, raped and killed by a local gang. After being forced to watch, he finds his two new friends and they seek out REVENGE upon the gang and life itself, resulting in what is a very brutal bloodbath.

Our second feature has young geek named Shinichi who is bullied by a gang with homosexual overtones. After constant torture, the leader of the gang kills his current boyfriend (pouring hot glue in his ear while he is sleeping) and decides to bring Shinichi into his world of sick depravity.

ALL NIGHT LONG 3: The Final Chapter

Our third film is the harshest of the set and really tough to sit through. Matsumura eliminates all of the sympathetic characters from the first two films and completely focuses in on one single mentally and physically handicapped high school kid and his OBSESSION for a girl he discovers through collecting trash. He collects her hair, toothbrushes; anything she throws away including her used maxi pads. He gets a break when three fellow coworkers rape and beat a girl and leave her for dead. He carries her barely alive body to his apartment and sustains her life as she slowly rots to death. Having a real life doll isn’t enough when his fantasy girl is still out there.

Overall, Matsumura, using revenge, domination and obsession as the only emotional outlet left in a cold society is an interesting theme and he crafts these ideas well for the most part. All scenes are explicit, extreme and very realistic. It doesn’t completely work as our director goes too far with some of the characters. A few go through hell and become worse than the villains beyond any type of reasoning or logic. In the third film, his use of symbolism to point out that all humans are trash becomes heavy handed and pounded in over and over beyond patience. On the plus side, besides the realism, is an incredible soundtrack in the first two films that is quite haunting and memorable.

For fans of extreme films, the lack of humor will probably be a relief and I agree. Sorry Japan and Hong Kong, but rape really isn’t funny. But, what is there will please those fans that collect the unusual tests of limits found in Asia’s extreme genre of filmmaking. Harsh, bloody, violent and disturbing, my personal favorite of the bunch was the first film. By the time it reaches the third installment, I feel it misses too much from Matsumura’s original direction and leaves nothing to learn or care about. Well, maybe that was his point, but it didn’t make good cinema. It was like watching I SPIT ON YOUR GRAVE without the revenge. This is a very talented director and it will be interesting to see what he does next. Hopefully he won’t try to push the envelope farther as I don’t think there is anywhere to go with it.