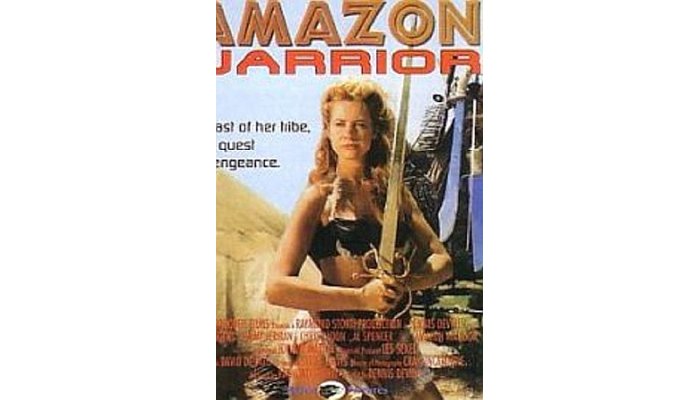 This little item is from Unknown Productions and Cinematrix Releasing. Taking place in an apocalyptic future Earth where technology is gone and people survive by their wits, skills and strength. Not much survival in a lot of ways. No cars, no machinery, no guns, reduced almost to the stone age level, but for some reason, most of the men still had machine stitched pants, and boots; an interesting clash of styles there.

This is the story of Tara (J.J. Rodgers, who is both attractive and familiar, but I can’t tell where I have seen her before) who as a child saw the destruction of her people and the murder of her mother by “marauders”. She now is a mercenary for hire and always on the lookout for those who destroyed her people.

She is hired to guide the two daughters of the Lord Barelli on a diplomatic mission through the wilderness. I was not impressed with the characters or the actresses who played these parts, but I guess it takes all kinds. As it is, Tara takes care of them the best she can. Along the way she meets Clint (Jimmy Jerman) a mercenary who shares a common goal of seeking out and destroying the leader of the Marauders, General Steiner, with her.

After being betrayed to the Marauders, she is going to be executed, but is rescued by … well, I don’t want to spoil the film for you. Suffice it to say, if you can’t figure out what is going on in this movie by the time you have reached this point, then you probably need to watch more movie.

This was not a truly great film. The humor seemed forced in a lot of places, and the background sound effects were never quite… well, effective. Yes, there was a lot of fighting, a lot of blood, and the special effects were fair, but all in all, this was just your normal sword and sandal film, upgraded to take place in a post-Nuclear world. It could have just as easily have been a thousand years ago, or a different world, etc. etc. Was it a good movie? Yes. Was it a great movie? Not by a long shot. But it was a nice way to spend an hour or so and see some action.