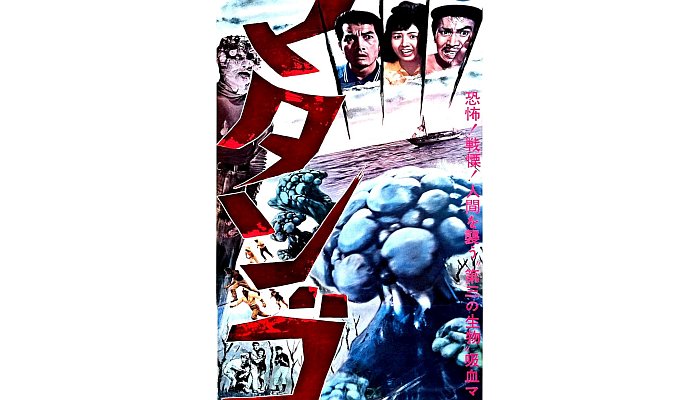 Here it is folks! We all grew up watching this film on weekend afternoons and late night television! Well, now is your chance to see it correctly and with a whole new perspective! Cool Stuff Video now sells a beautiful uncut, widescreen, subtitled print! The film turns from a nostalgic memory of a silly monster movie into what director Ishiro Honda intended, which was a terrifying excursion into the mentality and greed of man. With an intelligent script, beautiful sets and incredible acting, Honda uses subtleties and heavy symbolism and disguises a well-crafted morality tale as a horror film!

Seven passengers survive a storm and end up on a deserted island. Once there, they discover a mysterious shipwreck that once housed a scientific team of radioactive experts, but no sign of what has happened to the crew and scientists. They also notice a lack of food on the island as well. No fish in the nearby waters, no wildlife foraging through the underbrush and even birds seem to circle away from the island. Oh, and one other thing there is fungus everywhere! Soon greed, egos and sexual politics come into play as each survivor strives to survive and be in control of their own faculties and sanity. The real horror is humanity falling apart at the seams. The mystery of the mushrooms just gives it that fun Japanese horror flavor. Both gel well together thanks to the smart script and beautiful cinematography.

As a kid, this film, amongst friends, helped coin, “There’s a fungus among us!” and the more mature themes managed to escape on by. The fun is still there, but with the added knowledge of the more complex storyline, the film has much more than traditional scares. It has bite! What really helped here, most likely, is the more direct translation of the original dialogue. The banter among the survivors is very realistic and true to form. Several errors were originally made or ignored by the U.S. dubbing release. Also, the print that was shown on television for many years, which also seems to be the same print most bootleggers carry, is in such bad shape and so horribly panned and scanned that the only thing left would be the awful dub job and the “Mushroom” monsters!

Video’s version is taken from a Japanese Laserdisc and is a crystal clear copy that really highlights the beauty of this film. The widescreen also adds a much-needed depth to the lavish sets. Upon seeing this version, I realized the whole scope of the film and how much production values went into making a respectful and intelligent horror film.

This just adds to the bonuses the film has to offer. Like the best of the Godzilla’s, the film is fun AND smart!