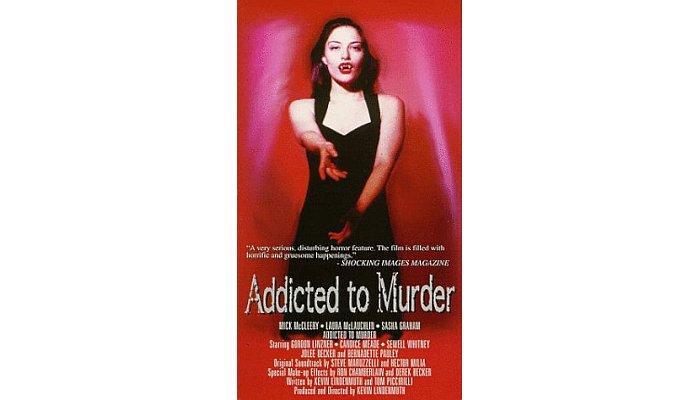 It is always a treat to find a good, well-made low budget horror film, even if I am getting sick of vampires. Come on, has no one heard of Werewolves? Well, thankfully director Kevin Lindenmuth, who made Addiction To Murder, went on to make what I have been told is an enjoyable film called RAGE OF THE WEREWOLF; but unfortunately, he is one of the few low budget independent filmmakers to venture from the vampire or slasher genre. Anyway, Addicted To Murder, while still from the same old vampire genre, is a good, well made, well acted low budget movie.

Joel Winter is a nice, respectable young man, going through a divorce. He is also a serial killer. But, he does seem to have a purpose. He is looking for a certain woman, Rachel (Laura McLauchlin). He met when he was a small boy, and she has returned to him over and over again. And, she loves it when he kills her. See, Rachel is a vampire, and she likes to be killed, so she can remember what it was like to be human. And in Joel, she finds what she needs. Joel has the perfect serial killer look. Sweet faced, innocent looking, but with a subtle, smoldering evil in his eye’s that is only seen if you know it is there.

The movie moves through time, and from Michigan to New York but it never loses its pace, or its place. It stays together, held by the adhesive that is Mick McCleery, Laura McLauchlin and Sasha Graham. These three make the movie, more than the effects or anything else. This film was theirs from the get go. Also in the film as a love interest (and you know what that means) was Jolee Becker, a tenant and friend of Joels. She did well with a role that in some ways was secondary to the overall picture. Rachel acts in many ways as a protective friend to Joel as a lover and a confidant. A protector. It is only later we understand why she is this way to him. At one point, she defends him against a sexual assault by his baby sitter and her boy friend. She also tries to help him cope with the death of his mother. Laura McLauchlin looks great, and her acting ability is excellent.

Years later, while living in New York, Joel keeps getting invitations to come to a club called “The Hungry”. He eventually goes, and there meets Angie (Sasha Graham) an incredibly beautiful, playful, devious, blatantly predatory young (?) lady. She tried to help him along in his life, almost the same as Rachel, but for reasons we are not really sure of. She forces him further and further away from life, and those around him, and deeper into an affair with her, that includes death, dismemberment and blood.

I really liked the character of Joel. He seems a mixture of many different types of people: strong, yet fragile, and tragic, yet accepting. Loving yet filled with hate. Joel was the perfect human monster. Rachel was, at first, a perfect friend for Joel. They could play off each other’s needs for quite a long time, each one fulfilling the urges and hungers in the other. Angie…. Geeze, what can you say about her? She’s as cute as a speckled puppy but as venomous as a cobra. Each character brought something special to this mix, and created a great situation.

Makeup and effects in the film were quite good. At least they impressed me. The soundtrack was well made, and entertaining. The sex was handled great. And, I have to say, this movie proves well and beyond, that a good, erotic horror film can be made without an abundance of T & A. In fact, I don’t remember any nudity. Heck, the language was pretty mellow, considering the situations. Yes, the gore was a bit extreme in some places, but it fit with what was going on. It was meant to shock, and it did. It served its purpose, without being used simply to fill space.

Spaced throughout the film were television interviews with characters from Joel’s life such as former schoolmates, employers, ex wife, etc. These offered a good look into the character of Joel Winter and, although they do give away a lot of the ending, they do not give away the finale, which was great. Also, the flashbacks worked well in the film also.

All in all, this was a first class movie. It was fun, entertaining, and the women were downright beautiful. My favorite line? “It’s only life. You’ll get over it.” Classic. This one is a keeper.