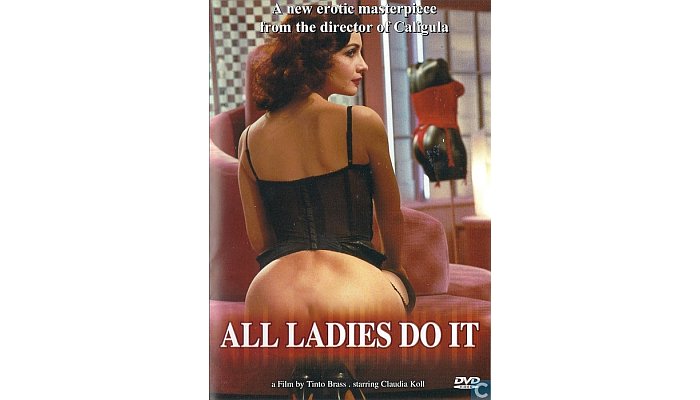 COSI FAN TUTTE
Also Known As:
ALL LADIES DO IT
All Women Do It
1992 – 88 minutes/widescreen
Directed by Tinto Brass
DVD Available From: CULT EPICS

“Everything I like is either immoral, illegal or fattening!”

Tinto Brass is not a filmmaker with whom I am overly familiar. I have seen a couple of examples of his output over the years and I have left those films with the strange feeling that I had not encountered a completed work. There seemed to be something missing for me. There wasn’t anything that I could really latch onto, nothing that made we want to see them again. This film changes that association I have with Brass but not necessarily for the better. I just have different reasons now. It is a complete film. You do leave with a sense of having been told an entire story with anything missing, nothing left out. Yet, there is a weird discomfort I had with the whole demoralizing attitude of the film that put me off somewhat.

As the movie begins we meet Diana (Claudia Koll), happily walking into her home wearing nearly nothing and looking for her husband Paolo. It’s a light couple of moments and presented with an air of rich, decadent, forthright sexuality. As Diana sits down to write to an advice columnist about her troubles with her husband and quietly sheds a tear, Pino Donaggio’s quirky musical score adds a kind of lightheartedness to the whole thing. Even during these early moments Brass hints at things to come.

The camera slowly closes in on Diana’s exposed rear as she expresses her feelings of despair and confusion on paper and as it turns out, that same well rounded derrire will be one of the main focuses of the film and several of the people in it. The rest of the film seems to center around arguing morality and the value of monogamy and fidelity. It’s a fight that morality, monogamy and fidelity apparently never had a shot at winning.

Flashback a little now… Diana’s problems seem to begin at a party she attends with Paolo. She meets an eccentric old French doof named Alphonse who is, from the moment he meets her, obsessed with her ass and finding a way to dig a tunnel through it. She is hardly resistant but the moment is not right, Paolo keeping a watchful eye and all. It seems that she has never cheated on him before but is well past considering it as a possible option. Not hard to understand why…

The people she works with encourage it, her sister encourages it and everybody she comes into contact with seems to be trying it… Temptation is everywhere. Even on a street car, arms raised so she can hang on to the support bar, armpit hair flailing in the breeze (Ick!), a seminary student replete with white collar has been “aroused” just by her presence. He stands up behind her and tries his best to dork her right through their clothes. Nobody is safe from Brass’s sexual dementia either. Hookers, hermaphrodites, homosexuals, old ladies, old men, aunts, sisters, cousins and more all have their respective screen time.

Later on, Diana is called to the reading of a will where she inherits her recently departed Aunt’s penthouse and all its contents. This includes the home movies of Auntie Emma blowing a number of men for money. All about the good memories, I guess. After leaving the will reading and stopping long enough to tongue whip her cousin Marco and squeeze his package a few times, she decides to stay there in Venice for the night even though the increasingly concerned and jealous Paolo expects her home.

She remembers that Alphonse, the perverted ass collector from the party, lives in Venice. A phone call and a panty ditch later she is on her way to his house to meet him. Yes, Alphonse finally gets to act out all his anally intrusive fantasies involving Diana. Which is fine with her. She loves it. Once home again with her husband, she begins to taunt him with the sordid tales of her cousin and the grizzled French freak with the lips tattooed on his hands. Not a problem since she has taunted him this same way before and it’s always served to further Paolo’s lust. That is, when he thought they were all just stories.

Discovering one hell of a nasty hickey that was none of his doing, he realizes that she is in fact telling the truth. A huge fight ensues; Paolo slaps the taste out of her mouth and wants a separation. Diana is totally dumbfounded. She just can’t understand how her marriage could possibly be threatened by something as unimportant as some mere “Happy banging”.

From here, Paolo hits the hard times. Missing Diana and consistently erect, he is at a loss for his next move. Diana’s sister, Nadia, visits him to try to tell him the error of his ways. To express to him that he is a fool for holding on to his “old fashioned stupid ideas”, to call him a “dumb ass moron” and to try to bang his brains out. When he refuses her advances because “I don’t want you! I want Diana!” she informs him that since his dick is so hard he is essentially a hypocrite and a “silly bastard” and at least his penis is telling the truth, or something to that effect. Nadia seems a bit embittered anyway so maybe Paolo shouldn’t take it so hard. Nadia’s first line in the following scene is “I’ve met assholes before but men take the cake!”

Hmmm Nadia and a friend from work take Diana out for a night on the town. Taunting transvestite hookers and their manly (And scary) bull dike pimps. Do these chicks know how to party or what? Yeah, right. They end up at an out of control rave where Diana downs some ecstasy and really cuts loose while horn ball music blares in the background. You’ll have to hear this tune to believe it. She can’t go on though; she misses Paolo too much. What can she do? Where can she turn? How can she convince him of her love? How can she make him understand that she is all for him in all the important ways and that she has done nothing wrong? I dunno, seems to all sort of work out by the end though.

Fans of Brass and his films are not likely to be disappointed here. There is a lot of style to his presentation and the film is beautiful to look at. The DVD is very mildly widescreen and the image is a bit bright and grainy at times. The soundtrack has some noticeable clicking and popping but it’s relatively infrequent. I have seen much, much worse. It’s a fair enough presentation and a safe bet would be that it looks and sounds better than any bootleg ever did. There are no extras, not even so much as a trailer, included on the disc.

So let us review what we have learned, shall we? “Faithfulness is unnatural”. Got it? Real happiness can only truly be achieved with the abandonment of all intimate morality and through many numerous sexual encounters that mean nothing at all and have no feeling associated with them whatsoever. And umm… Oh yeah… Planting your pole in the backdoor badlands once in awhile can strengthen a troubled marriage. Okay? Class dismissed.